This article was originally published on February 22, 2022 on The Restless Viking website.

I was amazed to learn from our friend, Brian Toronyi, that a bomb had accidently been dropped near his home in South Carolina on March 11, 1958. The Mark-6 left a 50 foot wide crater that was 25 feet deep at Mars Bluff. With a little research we learned that there have been 32 accidental incidents with atomic bombs since 1950. It was unsettling! We needed to investigate this site and learn the truth of this Mark-6 atomic bomb.

Our first goal was to find the crater. This was not a well-known location and took some of Chuck’s army pathfinder skills and knowledge of coordinates. The information led us to a neighborhood, but since it was private property, we needed to find another way to the site.

Next to an abandoned gas station we found this tiny metal sign, “Atomic Bomb Accident.”
We continued down this lonely, crumbling roadway.
Departing our Jeep, Chuck and I crept through the overgrown wooded path. 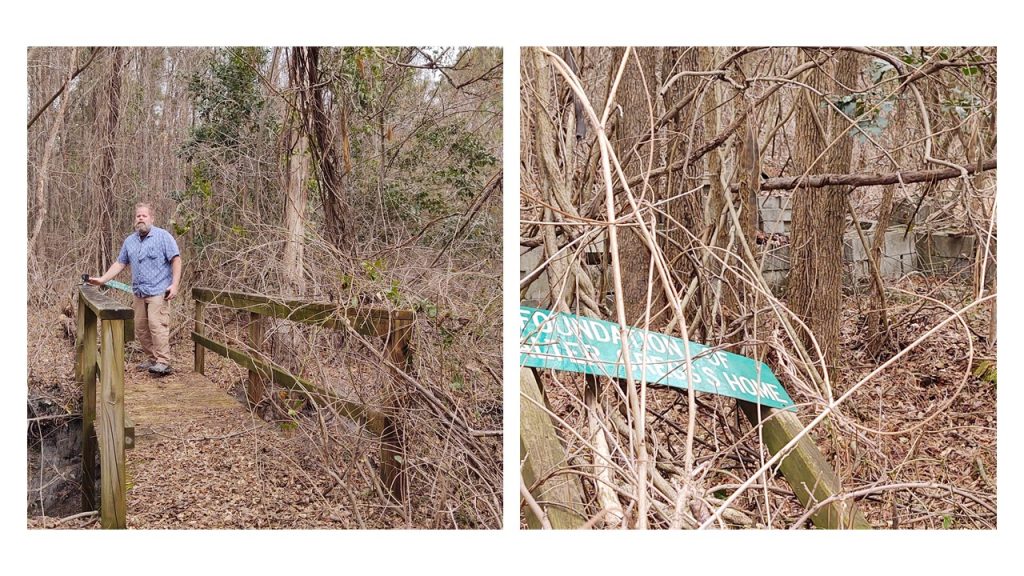 A footbridge took us across a small stream where we located the cement block foundation of the Gregg’s home. The sign leaned tiredly against the vine-covered trees.

Continuing through the woods, we found the bomb crater resting innocently among the trees, disguised as a vernal pond.

This vernal pond had once been a fifty foot crater caused by an atomic bomb.

This forgotten spot did have some information. A cut out board (highlighted in the top photo and seen clearly in the bottom picture) demonstrates the actual size of the Mark-6 bomb.

Signage revealed the regretful truth at this site.

DaViking (Chuck) took time to clean the plexiglass protecting the news articles about the accidental release of this bomb.

As we made our way back to the Jeep we ran into a father and daughter pair searching out the history of this site. We chatted about local areas of historical interest. It’s wonderful to meet others who hold curiosity.

Less than an hour into the B-47’s flight on March 11, 1958 a control light started flashing.  It warned that the nuclear bomb locking mechanism wasn’t engaged.  The team of three were heading to England with a few other planes on a practice mission called, “Operation Snow Flurry.” Their assignment was to simulate bomb releases in order to determine the accuracy of their “drops.”

Mark-6 Nuclear Bomb
The workmen loading the bomb had difficulty with the locking pin and had to tap it with a hammer.
The policy was to release the pin upon take off and landing.
Then replace the pin once the airplane reached proper elevation.

Navigator, Captain Bruce Kulka, (one of three crew members) removed his parachute and crawled into the space below the bomb to investigate the locking mechanism. He didn’t locate a locking pin, so he climbed back up to look at the top of the weapon. Kulka couldn’t see over the bomb as he shared the same height as the explosive.

So Kulka hoisted himself up on the bomb grasping at anything.  He inadvertently hit the ‘emergency release’ pin.  The 7,600 pound bomb dropped into the bomb bay doors.  With the weight of the bomb, the doors opened releasing the explosive. Without his parachute, Kulka scrambled to take hold of anything to prevent himself falling through the doors as well. With grace and luck he managed to stay onboard the plane.

At the same time the main communication lines in Florence County were jammed as people reported seeing two plumes of smoke in the air.  It was some time before the message was effectively relayed.

Their plane had been filled with enough fuel to make a long journey to Canada, then over the Atlantic to England. With this excess of fuel it would be unsafe to land, so the crew needed to ‘burn off’ fuel by circling for over two hours. They attempted to fly over the area where the bomb had made impact, to take pictures, but there was too much smoke and debris to capture a clear shot. Those two hours must have stretched at the slowest pace for the airmen.

When they were finally able to land safely, the three were met with armed air police who, “relieved them of their weapons.” The trio was escorted to a room with ‘hastily arranged mattresses on the floor.’ The men were told that they would stay there ‘at least over night.’ The team was NOT permitted to make contact with their families. The leaders on the ground had worried that the three airmen may have released the bomb on purpose.

After being questioned by General LeMay, who had experience with bombs and understood Koehler’s explanation of the pin. The squad was released.

Helen (9), Frances (6) and their cousin Ella Davis (9) had been in their playhouse in the woods twenty minutes before the Mark-6 had been accidentally released. Luckily, the little ladies had decided to head back to the house to continue their play.

The bomb created a crater 25 feet deep and 50 feet diameter. The surrounding trees had been flattened. Only shards of the playhouse’s metal roof were found. Tiny bomb fragments littered the area.

Nearby, Water (Bill) Gregg’s home was shaken off the foundation.  6 family members were injured. Miraculously nobody was killed.

Ella had been stacking bricks to make a play kitchen when the bomb hit. She doesn’t recall the explosion. Effie (Mrs. Gregg) had been sewing in the parlor when suddenly she found herself crawling out from under boards and plaster. She had received a few stitches at the hospital. Walter (Bill) and Walter Jr had been fixing a bench in the shed. Bill stated that he thought a plane had crashed.

Seeing injuries on Ella and Effie, someone ushered the family into his car and drove them to the hospital. Ella said she saw the speedometer reach 80 mph. In my research it had been unclear as to who this driver was, but I found JA Sanders, a traveling salesman, had reported that his car was completely turned around on the road. Maybe it was Sanders or possibly a neighbor who Ella, the cousin, hadn’t known.

Ella Davis, their nine year old cousin, received 37 stitches and was the only family member to spend the night in the hospital. Photo Credit: Florence County Museum

The blue dot shows the location of the playhouse where the girls had been playing.
The red dot marks the bomb crater.
Photo Credit: The Florence Museum

Members of the flight crew each personally paid their respects to the Gregg family. Over the years they kept in touch with Bill and Effie.

The destruction caused the family to relocate.
The Gregg family decided to never return to this land that had been in the family for over 100 years.
Photo Credit: The Florence County Museum

The Gregg family moved to Florence, South Carolina with only the clothes on their backs. Initially The Red Cross helped with some immediate living expenses. The family had been offered a monetary settlement of $36,000 from the military. The money wouldn’t have been enough to rebuild, let alone replace items ruined by the explosion. With a new law enacted, Walter (Bill) Gregg was permitted to sue the United States Airforce, which he did! After three years and three months he received the original offer, $36,000, from the United States government.

The Greggs had been asked to not talk about the incident to the press. However, they were on a TV show where they’d stumped the panel with “An atomic bomb fell in our backyard.” I’m not clear about the date of their appearance on “I’ve Got A Secret.” Sponsored by Winston cigarettes, the host puffed up a storm during the tapings that ran from 1952 – 1967.

With repeated testing of the ground and the Gregg individuals, the Airforce reported, “minuscule amounts of radiation had escaped.” The uranium/plutonium core had not been inserted into the bomb. It was the policy to carry this core in a separate part of the plane.

The Airforce repeatedly checked the land and the Greggs for Uranium.

If the Plutonium core had been inserted into the 7,600 pound Mark-6, it would have annihilated everything within 5 miles and caused rampant radiation poisoning.

Within days of the accident, locking pins were to be inserted in nuclear bombs at all times. A new design was created requiring a specific electrical impulse for nuclear weapon triggers.

What Happened To The Flight Crew?

I needed to know what had happened to the flight crew. Each had personally shown their remorse for the incident, but were there consequences? The pilot, Earl Koehler, remained in the Airforce for twelve more years and retired as a Lieutenent Colonel. Woodruff, the co-pilot, had left the Airforce for civilian life in 1959. Captain Bruce Kulka, the navigator and bombardier, continued flying with the USAF for thirteen more years. Kulka retired in 1982 with the rank of Major.

Walter (Bill) and Effie remained married for 70 years. The pair rebuilt their lives from scratch after the accidental bombing. Bill had a 41 year career with the railroad. Their three kids continued to live in Florence, South Carolina. Gregg passed away in 2013 at the age of 92 years young.

In February 2022 we had spent the weekend with our friends, Brian and Doris Toronyi, at their new home in South Carolina. Chuck and Brian had worked together on Kent County Search and Rescue. They have spent a fair amount of time setting up pranks and festive gatherings over the years. It was great to see them again!

Brian’s creativity and strength continues to motivate all of us! Thank you, Brian, for leading us to the Mars Bluff Atomic Bomb site. This unusual history needs to be shared!

Thank you, Brian, for this intel! As always, stay curious!