This article was originally published on June 8, 2021 on The Restless Viking website.

The Badger’s motto is “BIG SHIP! MORE FUN!” We made memories on our voyage across Lake Michigan from Ludington to Manitowoc and then on our return trip several days later. The Badger Car Ferry is the last coal-fired passenger steamship in operation in the United States. My first trip aboard was in the late 1970’s. Then from 1998 – 2007 we traveled on The Badger several times with our kids. Come along with us on our cruise caper!

The Badger was launched in 1952. She was designed to carry train cars for the Chesapeake and Ohio Railroad Company. Daily routes started in 1953. Back then there were three ports in Wisconsin: Manitowoc, Milwaukee, and Kewaunee. Ludington, Michigan was the fourth port of call.

At 410 feet long and seven stories high, the Badger can travel at 18 miles per hour.

We were impressed with the captain’s ability to pull this ship into port using the anchor team. They are dressed in orange on the platform.

As we left Ludington The Badger passengers received friendly waves. I had a feeling that this was a routine for the couple. Their enthusiasm made me smile!

There’s a lot to do on the Badger cruise across the lake. They have free entertainment: a movie theater, BINGO, a museum, a game room and walking around the ship. I bought souvenirs in the gift shop and snacks in the cafe. There are 40 state rooms that can be rented for an extra cost.

The staterooms can be rented for $49.00. I felt like we stepped back into the 1950’s. The ship’s design has been kept in their original splendor. There are two beds. The window and fan created airflow. The rumble of the motor and the rock of the waves made for pleasant reading and relaxing.

The desk can be folded down as another bed! Clever!

Yes. That’s an emergency blue puke bucket up above, near the flags on the wall. (I didn’t need it!) Each stateroom has it’s own restroom, too. It was a charming step back in time.

Each mariner flag represents a letter of the alphabet. This spells out “Badger!”
Da Viking won this hat for me while playing a trivia game!

Suddenly, Chuck shows up with popcorn, a pretzel and is wearing a captain hat! He is a joy!

Da Viking was sporting his own captain’s hat.

It’s always a good time for a snack! You are permitted to carry on your own non-alcoholic beverages, but coolers and food need to be left in your vehicle. There’s a grand selection of goodies to eat on both the top and middle decks. Hamburgers, hot dogs, baked pretzels, fruit cups and yogurt were popular with passengers.

There are two places to purchase food. The Upper Deck Cafe (pictured) and the middle deck.

Todd Hansen hosts exciting games of BINGO and trivia! Da Viking won a deck of playing cards on our return trip!
Of course he told Todd his name was Beauford.

Todd Hansen has been the voice of Badger BINGO, trivia and jokes for seventeen years! He makes the four hour cruise a memorable party!

Many summers were spent making this trip with our kids, Charlotte and Noah. Todd was always as personable and fun, as he is today. Learning the audience member’s names, he’d engage them with kid-friendly jokes. After winning BINGO he’d ask where the person was from.

Years ago when we shared that we were from Lowell, Michigan, Todd sat up straight, “I have nearly every high school football helmet in my collection, except Lowell!” It turns out that Todd is also a sports announcer and knows football facts from around the country.

As a teacher in Lowell, I knew the football Coach Noel Dean. Todd and I exchanged email addresses and the challenge was on. Emails flew between the three of us. Coach Dean was reluctant at first. Todd and Noel corresponded on their own. Coach Dean retired shortly after this correspondence. I have been curious about Todd’s helmet habit ever since. On this trip I finally found out the conclusion to the saga. Todd shared that he does own a Lowell helmet. It had been properly added to his collection years ago.

Before we knew it we could see land and the four hour journey was coming to a close.

The Docking of The Badger

I marveled at the skill and teamwork that it takes to bring the Badger into port.

The engine telegraph with its distinct order of rings allows the crew to know the speed and direction of the vessel.

This is truly a step back in time for the captain. The docking procedures and communication with the crew is authentic to when the ship was built in the 1950’s. 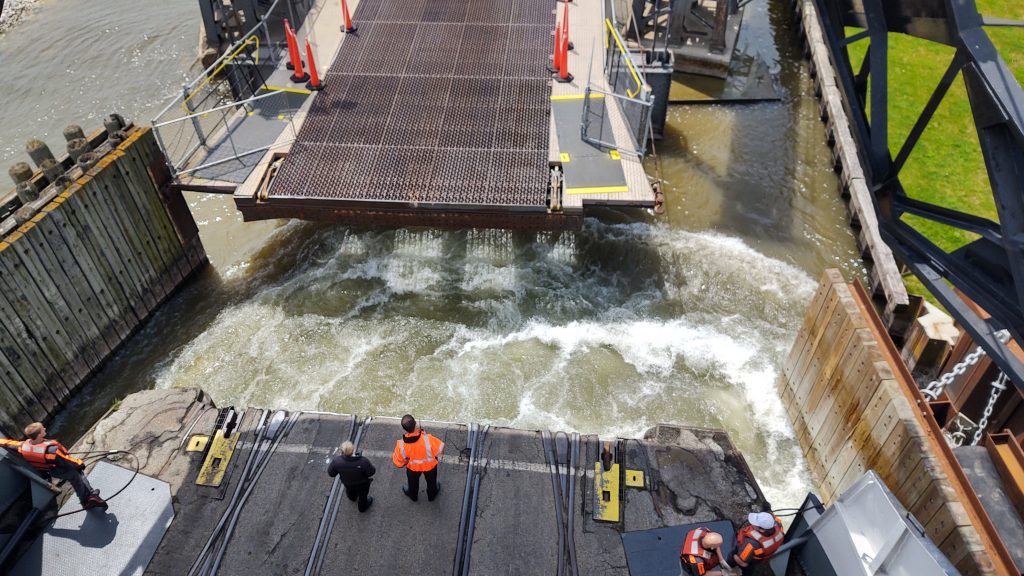 The captain docks the Badger in Manitowoc, Wisconsin. You can see the train rails in the bottom deck.
Train cars used to be hauled n the Badger.

There are no bow thrusts. Rather, the Badger captain uses the anchor and crew to dock this large ship.

The anchor team on land and on the ship do a fascinating ‘dance’ of choreographed steps to bring the Badger into port.

The boat’s name came from the University of Wisconsin’s mascot, The Badger.

After providing excursions for decades, the industry saw a downturn in the late 1970’s. In October of 1980 the car ferry service ended.

Glen Bowden and some Ludington businessmen bought the three car ferries in 1983: Badger, Spartan and City of Midland for one dollar each. The Michigan-Wisconsin Transportation Company struggled for years. Sadly, in 1990 all three were permanently docked.

Charles Conrad invested 1.5 million dollars into The Badger and renamed the company Lake Michigan Carferry. In 1992 The Badger was re-dedicated. Conrad’s hope was to have at least 80,000 passengers that first season. He was thrilled to end up with 115,000 attendees.

Conrad has kept The Spartan as a parts reserve. It’s docked in Ludington.

In 2002 The Badger was registered as a Wisconsin Historic Site. The car ferry has once again been providing a successful service! The Badger makes 450 crossings annually. On select dates, shoreline cruises in both Ludington and Manitowoc are available, too!

What happens to all the coal?

When my Great Uncle Gus was a captain, the used coal was dumped into Lake Michigan. This was found to be irresponsible to the environment. In 2015 a conveyor system was established. The coal is now unloaded in Ludington and used for making cement.

Dressed in brightly colored vests, crew members sprint into the bottom level of the Badger and drive out each vehicle.

Travelers waited for their cars to be brought off the ship.

All sorts of vehicles make the journey.

Even semi trucks make the trip!

The Badger fulfills the motto: “BIG SHIP! MORE FUN!” I encourage you to take a cruise on the Badger! It’s far more enjoyable than driving for hours through Chicago or the Upper Peninsula of Michigan! Stay tuned for Da Viking’s video of our journey on the Badger! Keep an eye out for articles about our capers on Washington Island, Wisconsin. It’s a charming place with Icelandic immigrants!