This article was originally published on July 27, 2021 on The Restless Viking website.

Da Viking (Chuck) and I have visited abandoned lighthouses on other excursions. On this day we were headed to a restored light on St. Helena Island in Lake Michigan. It had been in poor shape until Scout Troop 4 from Ann Arbor started restoration in 1986. Little did we know that we were about to meet this amazing group and witness their dedicated work! 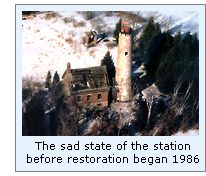 As you can see, the parts of the roof were missing! Remarkable, time-honored work has taken place to bring St. Helena Lighthouse and quarters back to life.
Photo Credit: Terry Pepper

Our Launch to St. Helena 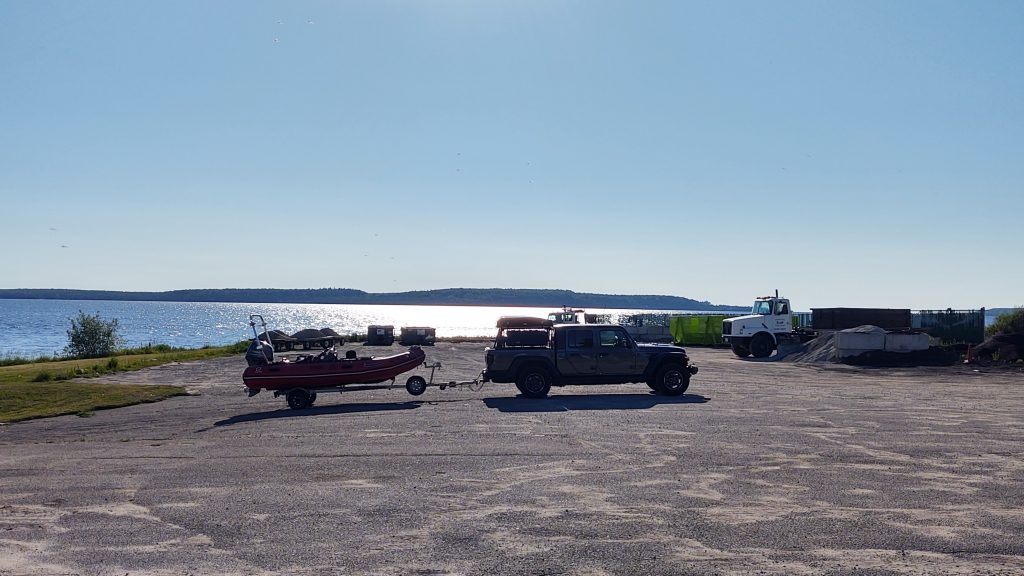 The day was clear and the water was calm. We launched Thor at St. Ignace in the upper peninsula of Michigan. We’d head west, under the Mackinac Bridge and continue for ten miles to St. Helena Island Light. 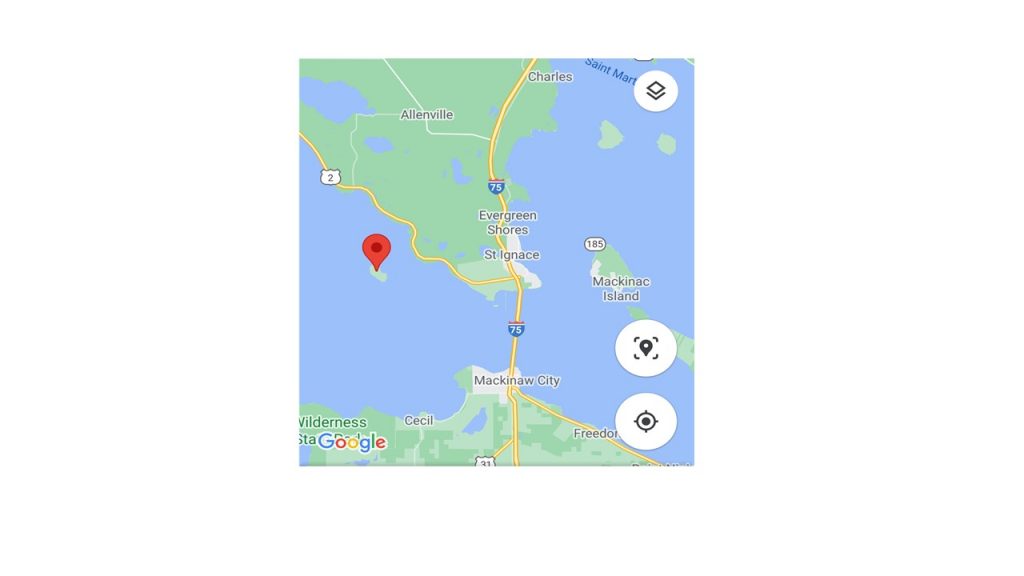 St. Helena lighthouse, one of fourteen reef lights in the Straights of Mackinac, had keepers living in the quarters from 1873-1922. At that time the light was automated by a “sun valve” invented by Nobel Prize winning Gustav Dalen. 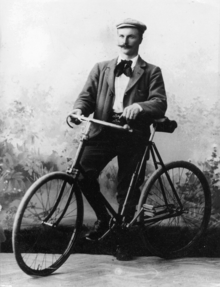 The “Sun Valve” design would respond to the temperature decrease at sunset by opening a valve. Acetylene would be released against the pilot flame illuminating a warning to mariners. Then with rising heat following sunrise, the valve would close and the flame would cease.

Our Journey to St. Helena Island 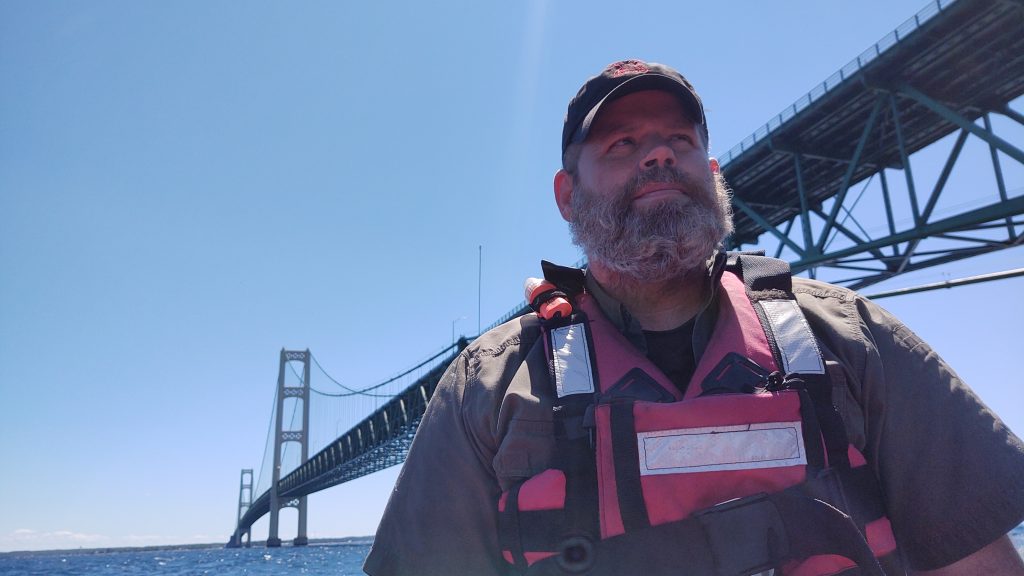 Da Viking navigates under the Mackinac Bridge staying clear of the shipping channel. 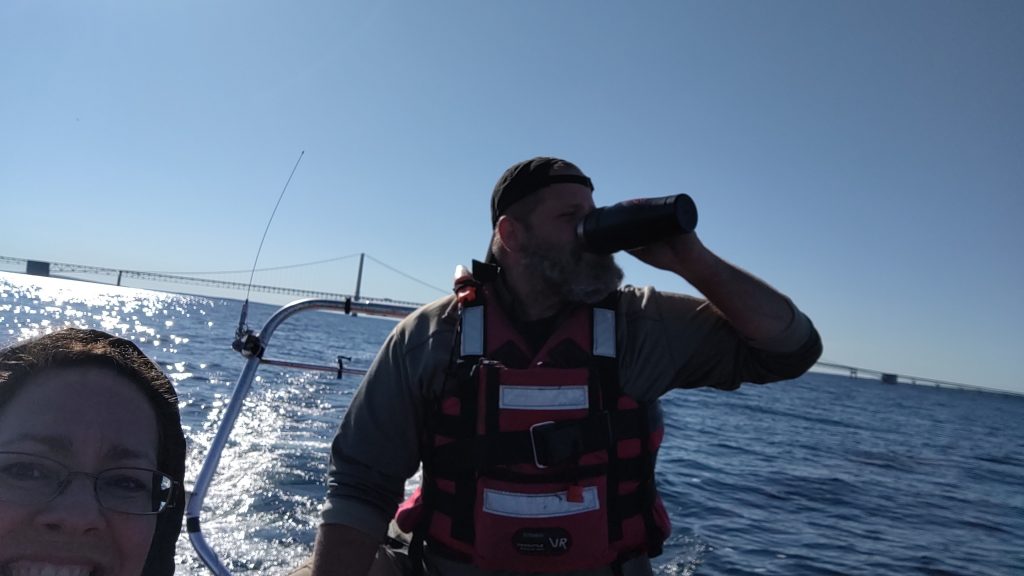 Traveling under the Mighty Mac is always a thrill for me. In the open water Da Viking could enjoy a gulp of his coffee. 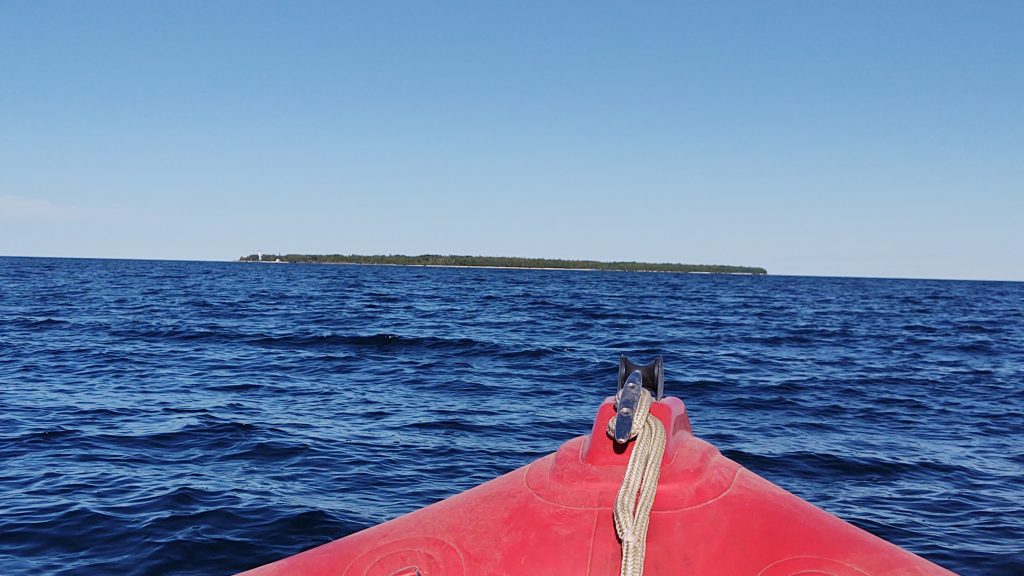 First we headed to the lee side of the island to see the location of the mid 1800’s fishing station.

The North Side – Fishing Station History

The northern side of St. Helena Island has provided solace to mariners from the southwesterly winds. It became a fishing station and cooperage with a population of 200 souls in the mid 1800’s. 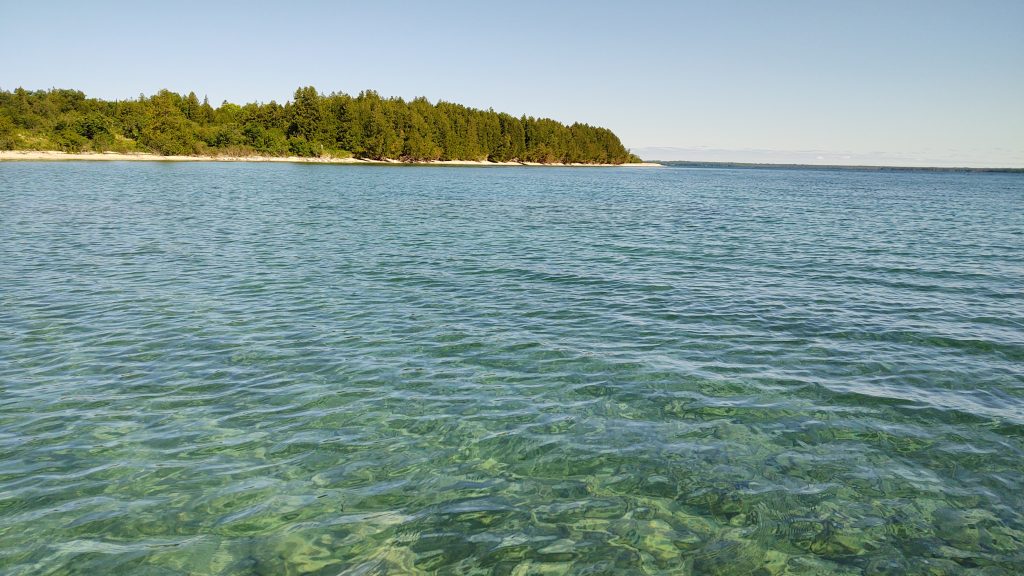 The northern side of St. Helena is a calm refuge from the wind and waves.

In 1853 Archie and Wilson Newton (brothers) bought this land from William Belote and started a salted fish business. At the time salting meat and fish was the best way to preserve protein rich foods. 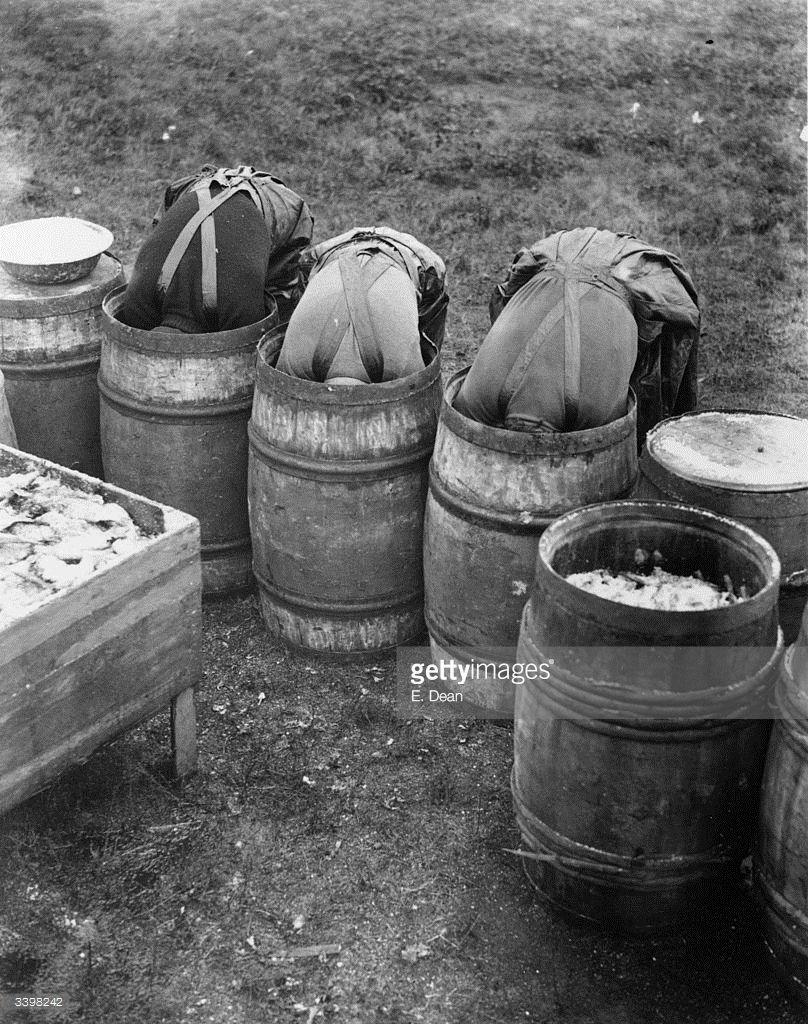 Women were putting a layer of salt in the bottom of the barrels to preserve the daily catch.
Photo Credit: E. Dean at Getty Images

The station was a busy village. There were coopers making barrels. Teams were unloading and salting the daily catch brought into the harbor. Others were loading barrels of briny fish onto outgoing ships at the dock.

Then we headed south along the shoreline. The lighthouse stood proud and welcomed us as we approached. The docks and boathouse were empty. It appeared that we would have the island to ourselves. 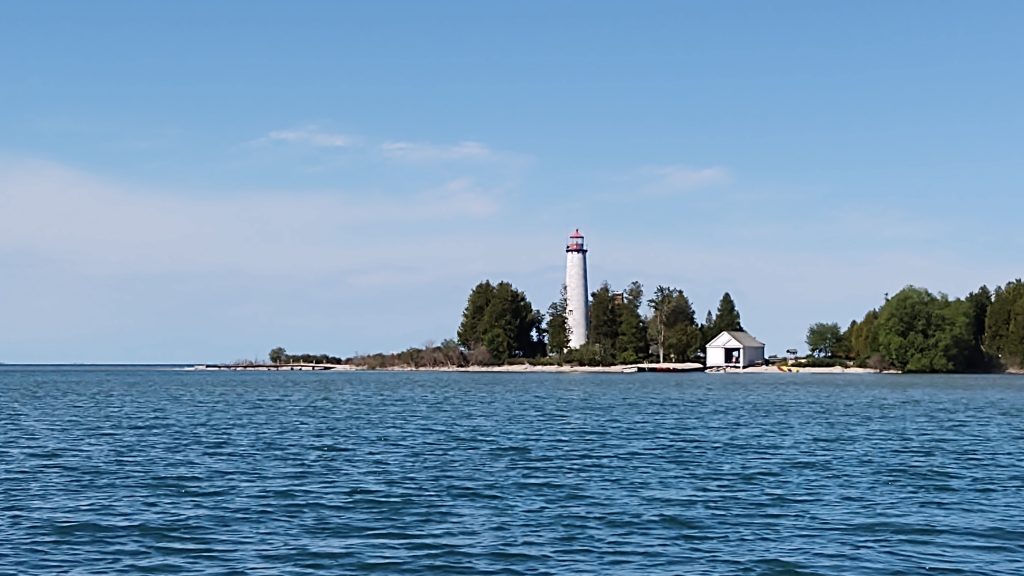 As we approached the keepers quarters we were wondering if it was locked, but hoping we could tour the inside. Suddenly we heard a small engine approaching. Another zodiac boat was heading toward the dock. Chuck went to help grab the boat’s line. 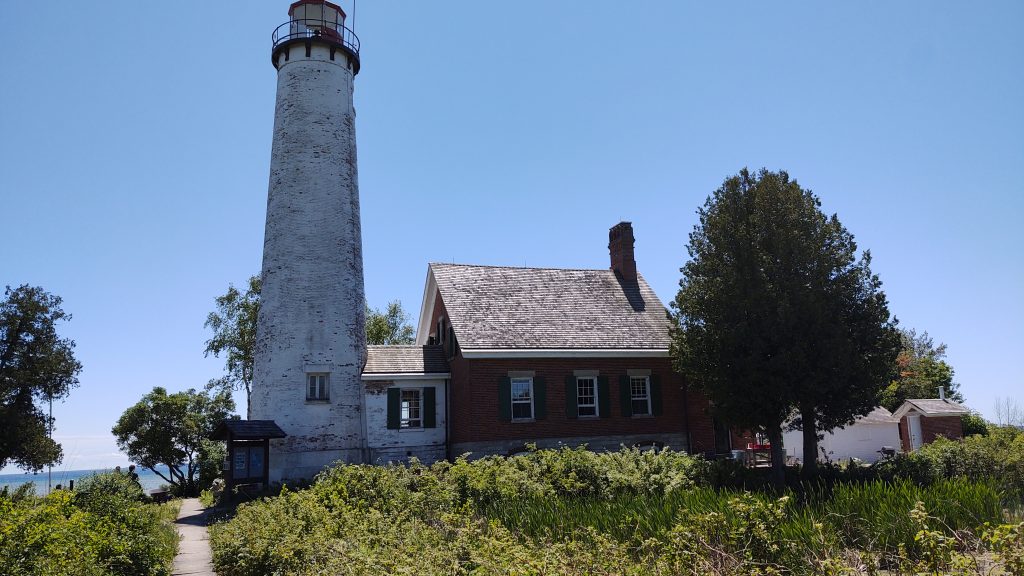 The gentleman asked Chuck, “Hey, are you a captain?” “Not yet.” Da Viking’s eyebrows raised in a question. “Well, we have Scout Troop 4 on their way here.” the man nodded and gestured to the red boat anchoring off shore. “You could help haul the gear then.” Evidently one has to be a captain to escort humans, but anyone with a low draft boat could easily haul gear.

Da Viking embraced this task with gusto! He doesn’t mind being, “volun-told” when it will be helping a team such as Scout Troup 4. We were honored to assist this cohort of eager volunteers. Dropping our gear on land, Da Viking was ready and headed toward the awaiting cluster. They greeted Chuck warmly! 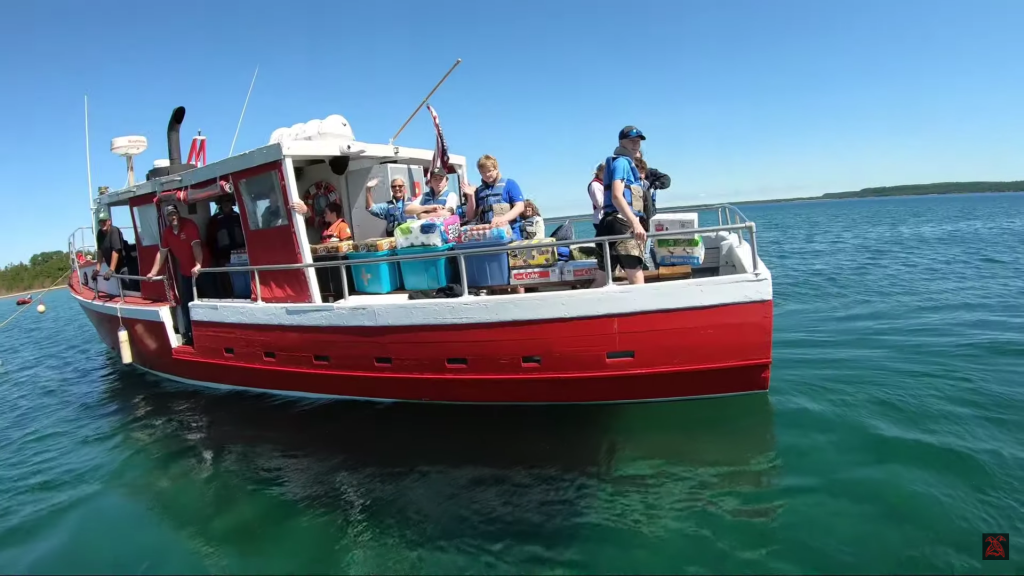 As a captain delivered the 20 kids and adults in his black zodiac four at a time, Chuck and another man ushered supplies. Abruptly, the other supply boat lost its scupper and was taking on water, so I helped pull it to shore and bailed the water out. It was a good thing I was wearing my quick drying ‘adventure pants’ and ‘swim socks.’ Da Viking completed the chore by retrieving the rest of the loads. 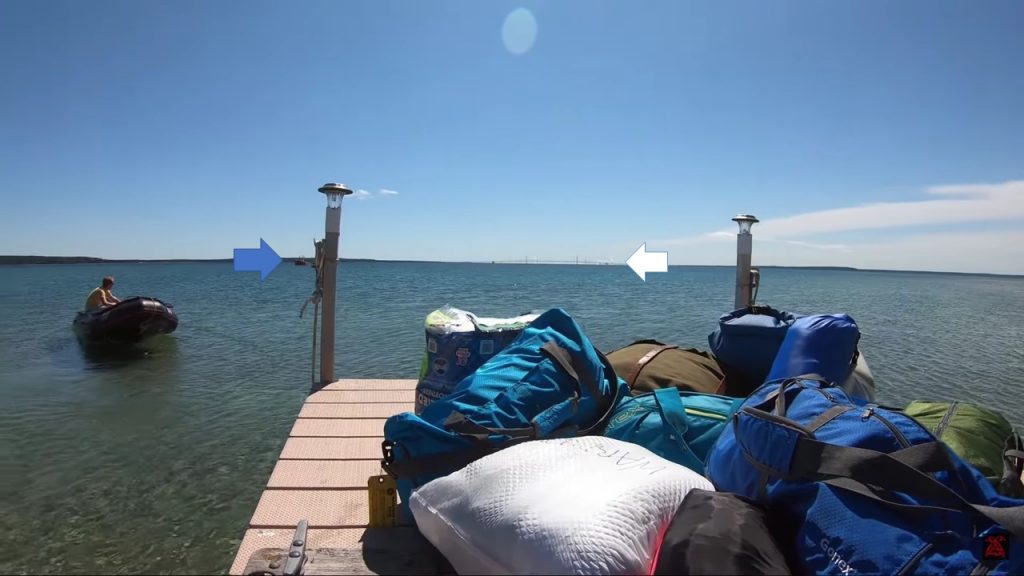 The blue arrow shows where Ugly Ann was anchored safely in deeper water.
The white arrow highlights the Mackinac Bridge.
In addition to camping supplies, dozens of trips were made to haul needed materials for projects as well as food, energy drinks and water.

As my pants dried in the breeze, I helped cart wagon loads of items to their designated spots. The tools went to the boathouse and the food items were brought to “the pantry’ in the basement of the keeper’s quarters. The kids used wheelbarrows to deliver their tents and sleeping bags to the camping area in the woods. 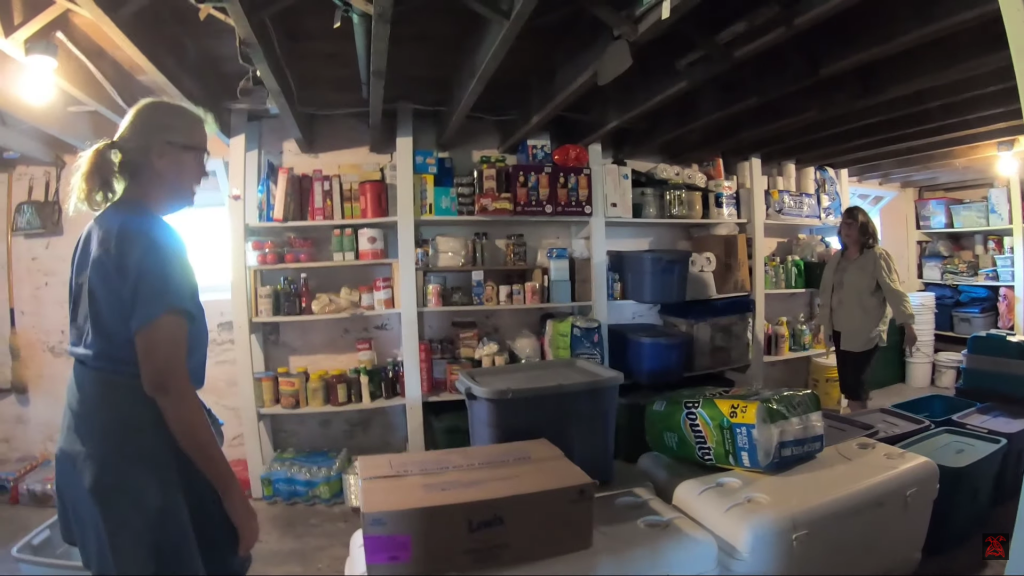 Niki (left) remains an integral part of this group as their cook and chief organizer even though her kids have grown.

Scout troop 4 hails from Ann Arbor and comes to the island for a full week each year since the mid 1980’s. Troop 61, also from Ann Arbor, along with Troop 400 from Calumet have also contributed to the restoration.

Many Eagle projects have been accomplished at St. Helena, too. Eagle is the highest rank in the scouts. After achieving 21 merit badges and receiving personal recommendations, an individual scout creates a service project and raises funding to earn this highest ranking title. 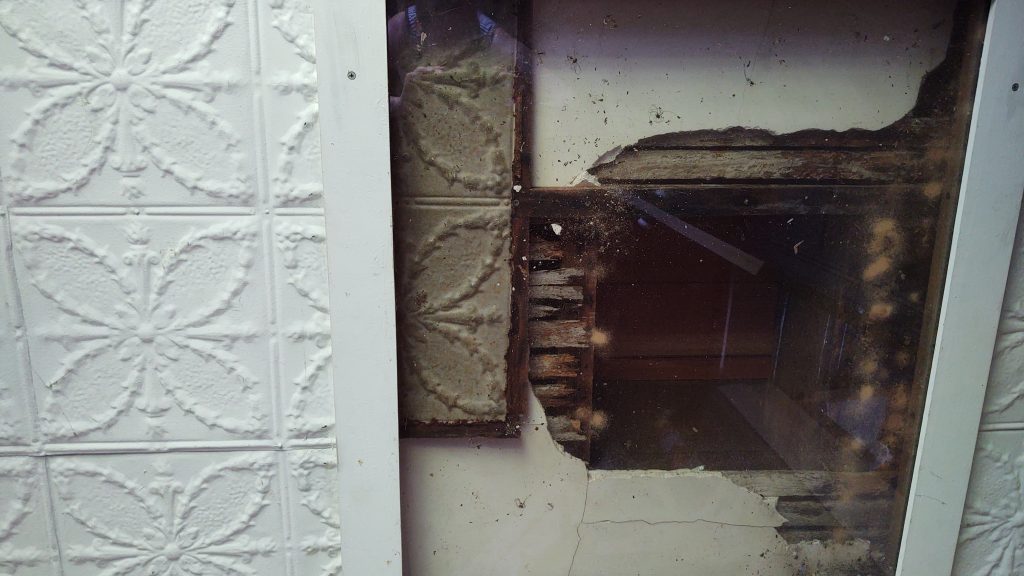 This cut-away was left in the ceiling by Dan Vandermade who restored the winter kitchen ceiling in 2005 as his Eagle Scout Project. 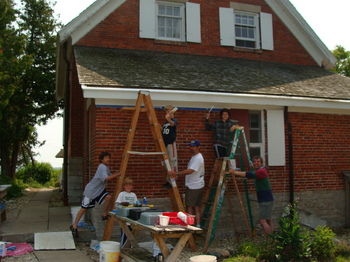 After everything had been unloaded and placed properly, I toured the renovated keeper’s quarters. I came through the back door. The summer kitchen was ready for action. It had been updated so large group meals could be prepared. 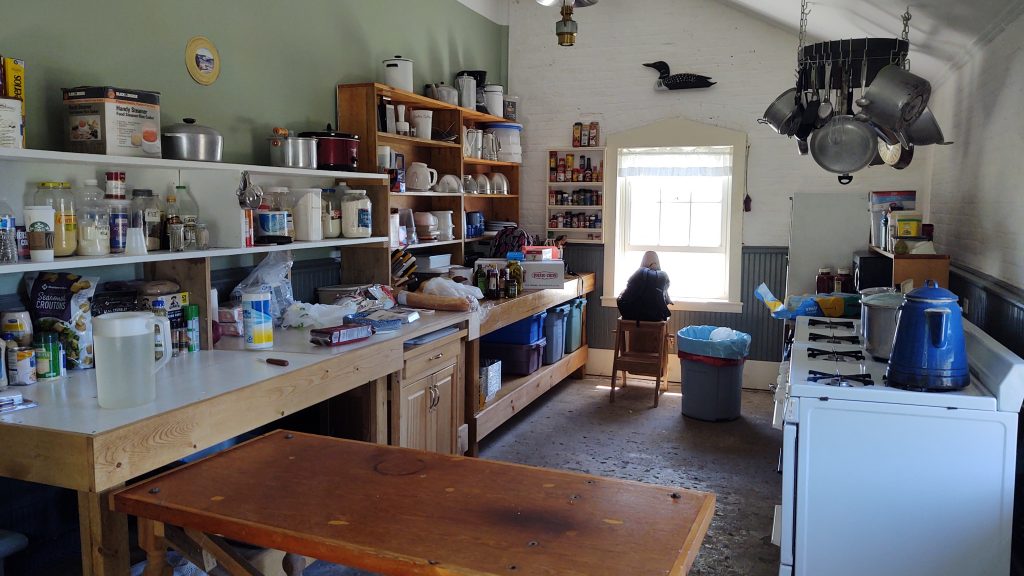 The summer kitchen allowed for cooking without unnecessarily heating the home during the muggy months.

The winter kitchen was complete with an iron stove. It would warm the home during the colder season. 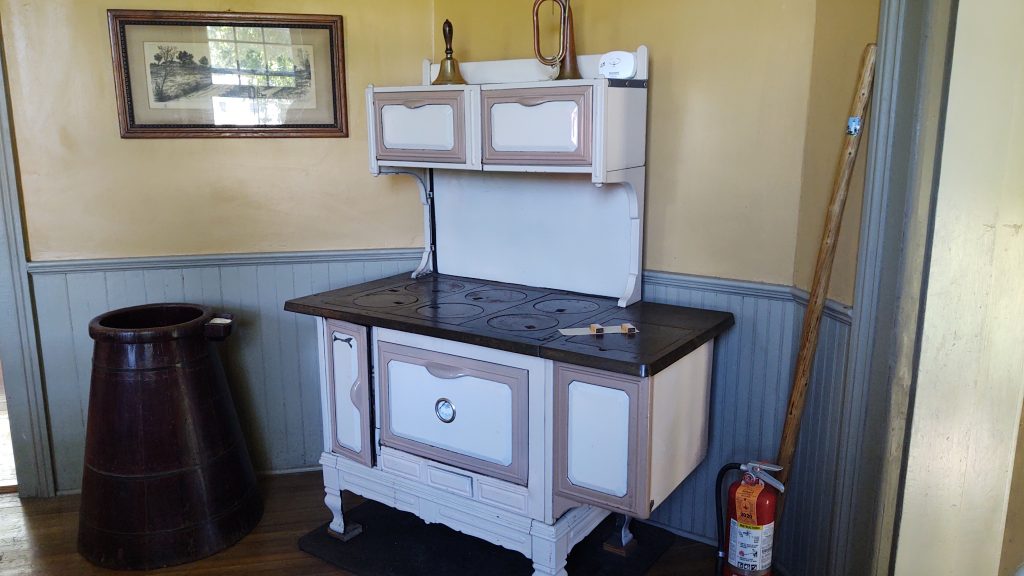 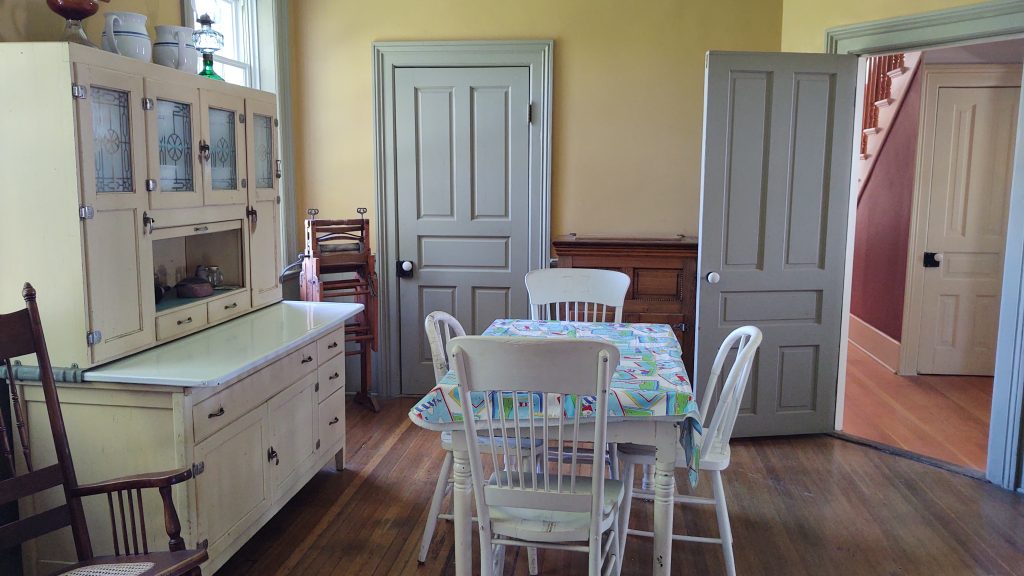 There are bedrooms upstairs (right) but some adults from the group were staying upstairs, so I remained on the main floor.

I marveled at the expertise it took to breathe life back into this home. Every part from the flooring to the furniture to the knobs on the doors had been painstakingly remastered to its former self. 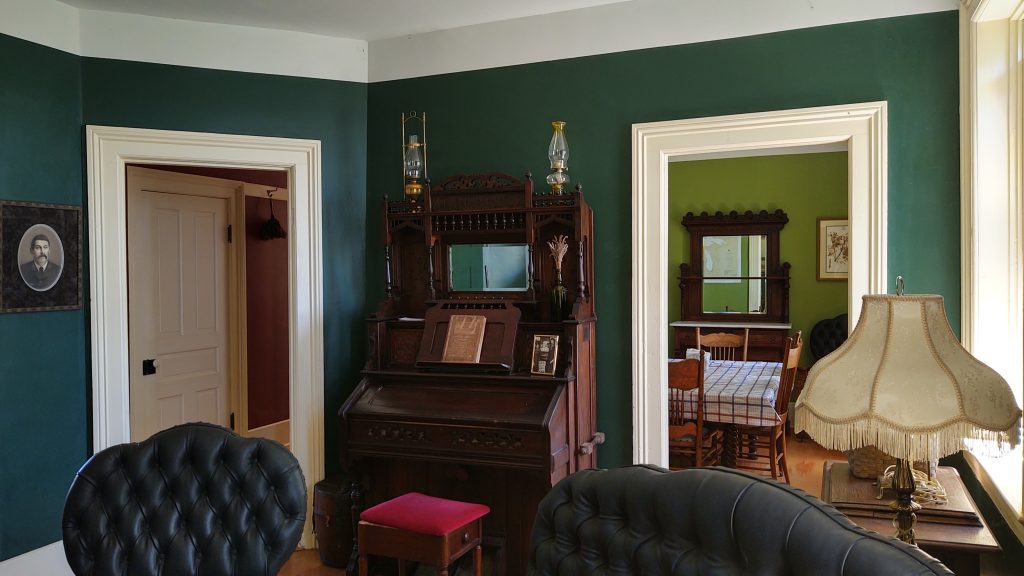 The Parlor
This organ was brought over in a zodiac boat! 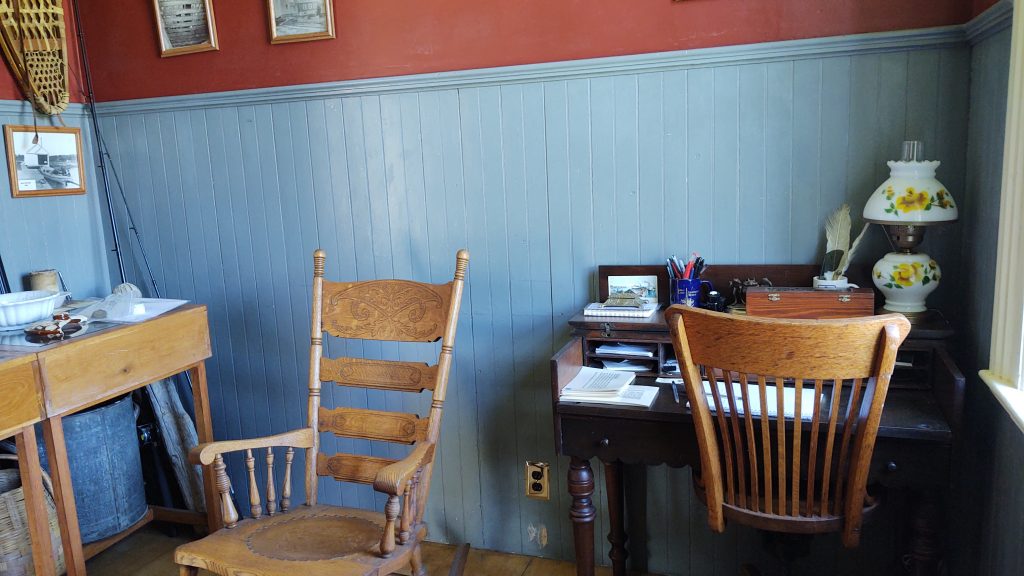 The spiral iron stairway awaited my approach. It’s a 63 foot climb to the top. 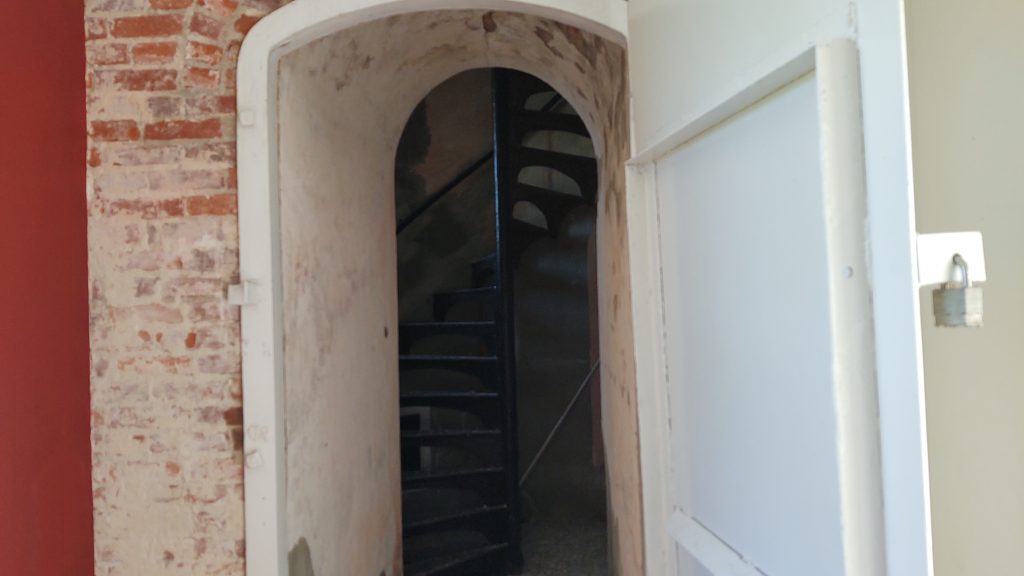 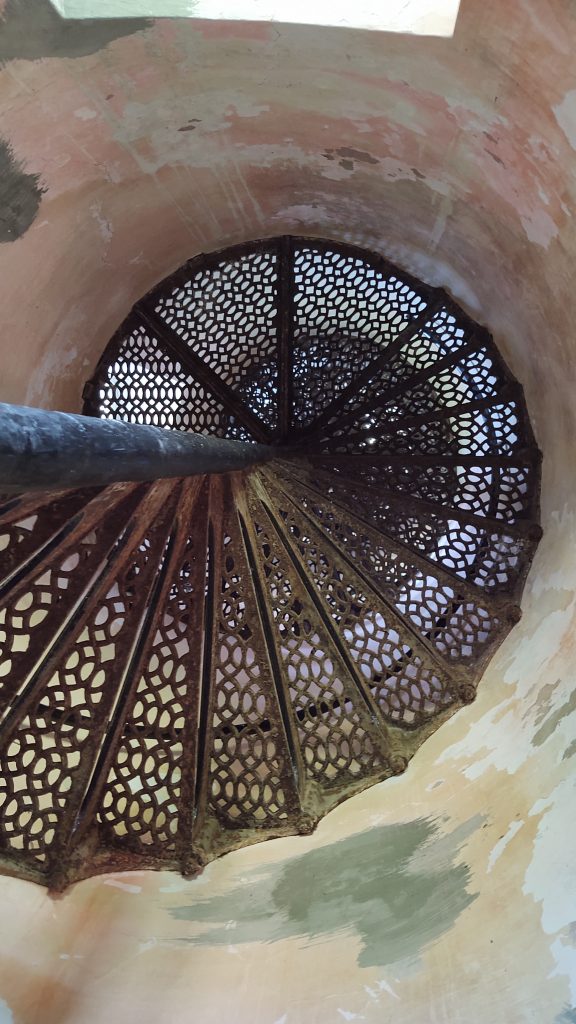 Seeing the view from the lighthouse is remarkable! 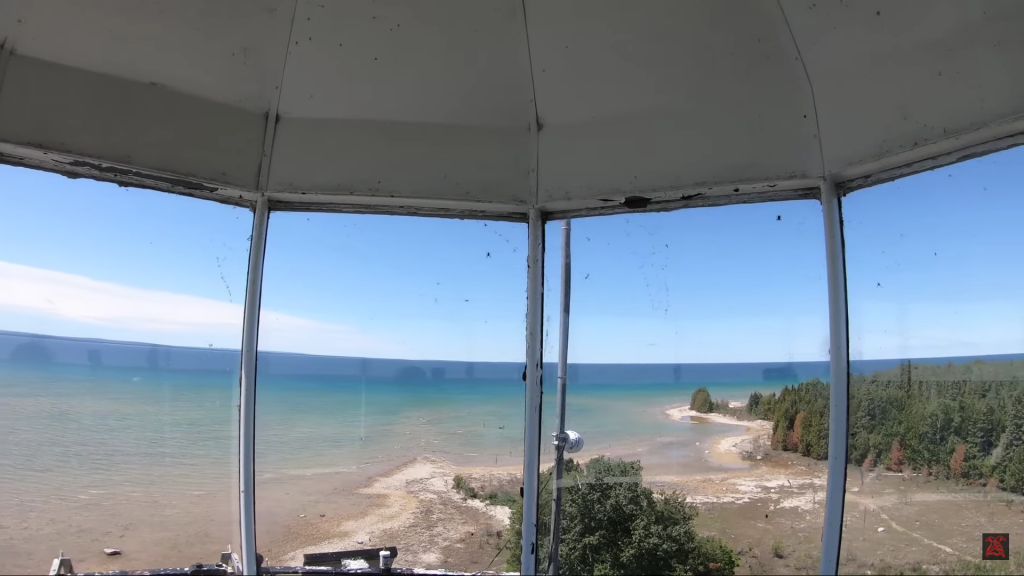 You can see the destruction of the wooded area due to last year’s high water.
Photo Credit: Da Viking

On my way to use the facilities, as I neared the woods, an eagle flew over the swampy area. I was in awe and called out, “It’s an eagle!” to no one in particular as I was frozen in awe. An eagle in it’s natural habitat! I stood still searching the sky. It was poised on the top of a pine tree. I watched it intently until it flew off. My belly grumbled. I suppose the eagle was in search of lunch. 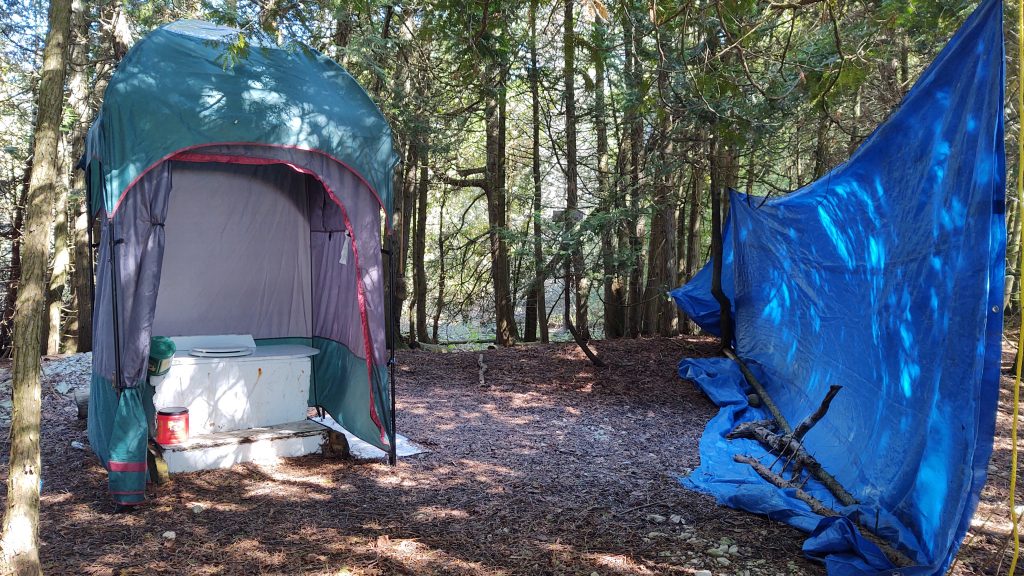 The space for necessities was secluded. 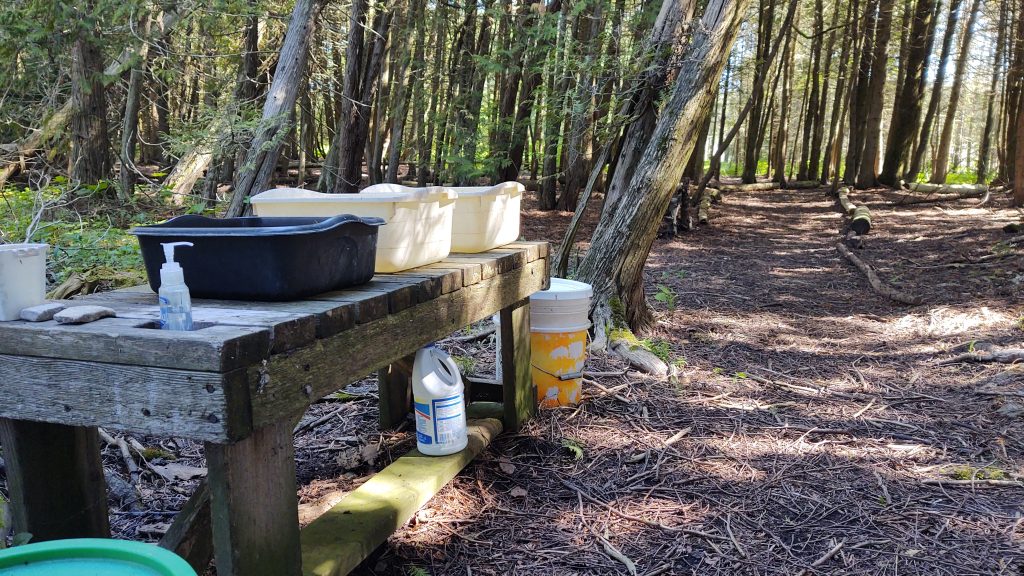 Camping Area For The Scouts

The cohort of kids had previously hauled many wheelbarrows full of rocks to create a path over the mucky wetland leading into the pine forest. This is where they would set up their camp for the week. 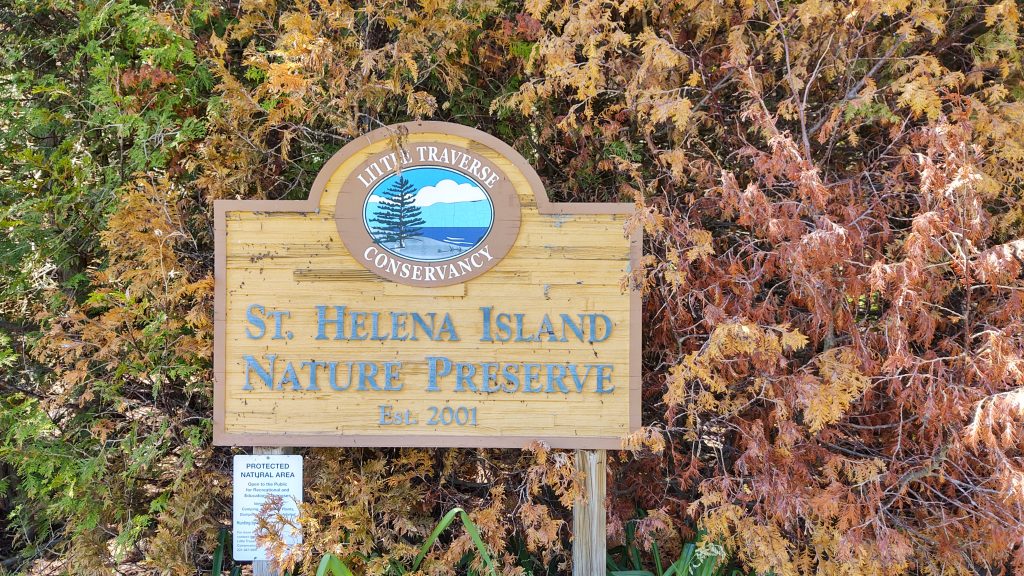 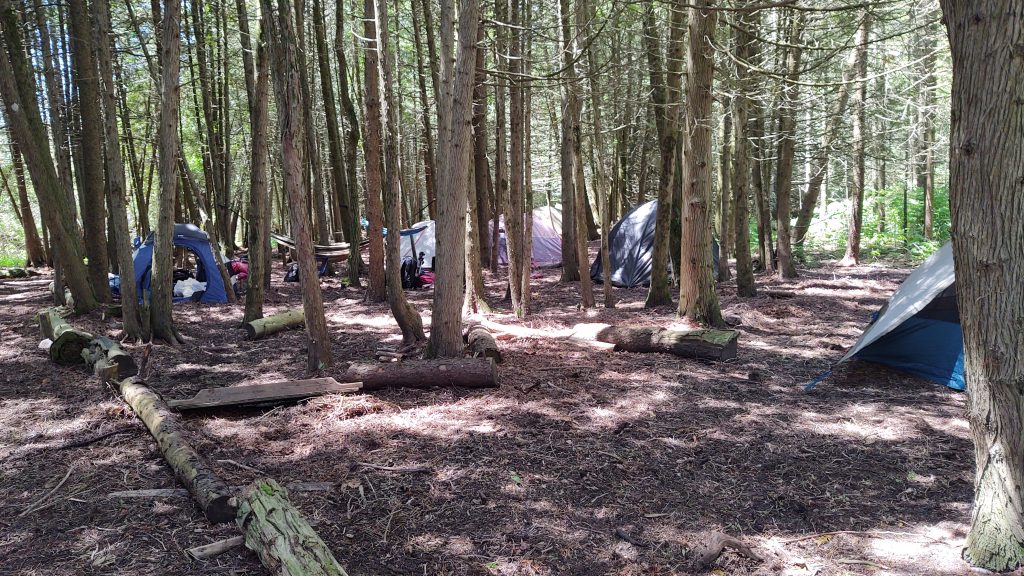 The way their tents had popped up so quickly reminded me of how mushrooms seem to spawn in the woods overnight.

After being invited to join the clan for lunch, we unpacked our sandwiches and one of the men sat with us. Mike shared that his parent’s cottage was just across the water. He and his brother knew St. Helena as “their island.” The pair spent entire days here as kids. “When people started fixing up MY lighthouse, I needed to help out.” He explained how he’d gotten involved. Later we discovered that we had been chatting with the president of The Great Lakes Lighthouse Keepers Association.

During lunch the whole group buzzed with energy. Making plans for their list of tasks was the focus of their conversations. Mike talked about they best type of paint to use on the outside of the limestone and that he needed special permission from the board. Their excitement was enchanting!

Lunch flowed right into their meeting. We were invited to stay longer, but we wished them well and reloaded Thor with our gear that had been watching all our activity from the rocky shoreline.

Our minds were sparked with awe at the decades of dedication it’s taken to restore this wonderful piece of history. Connecting with the people whose passion centers around the restoration of St. Helena Island Light captivated me and brought a deeper appreciation for the tireless work they’ve accomplished. Meeting this group was an unexpected honor! 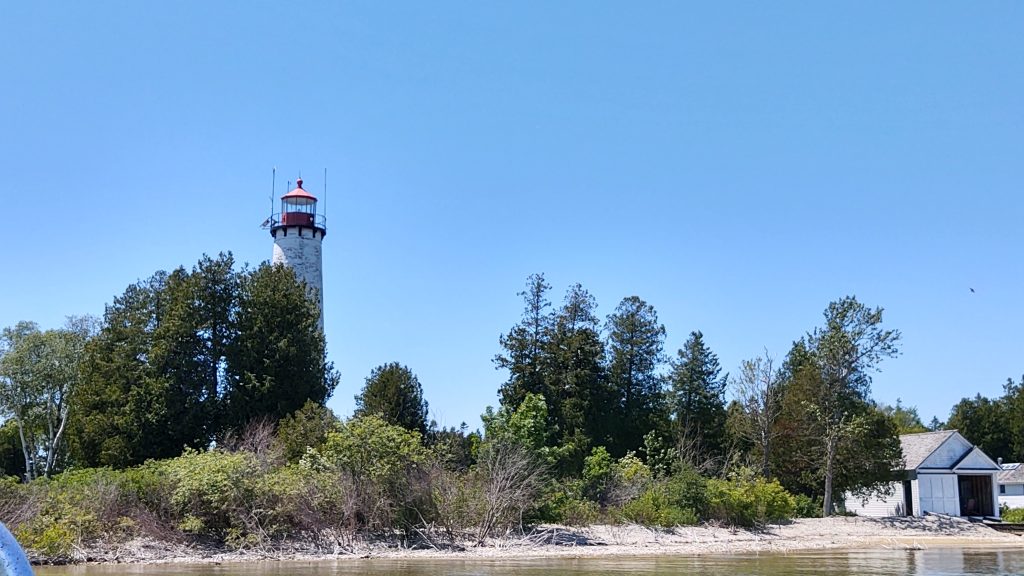 St. Helena Island Light is waiting to be appreciated.
Da Viking’s YouTube video of our trip to St. Helena Island Light is engaging and gives a wonderful perspective to our time visiting the island.
Chuck and Martha Hayden, aka The Viking and Poppins, enjoy going on adventures off the beaten path. They also like to share their explorations with others. The Viking is a retired expedition leader while Poppins is a retired teacher. The two offer independent views of their journeys showcasing places, people, and cultures as they explore the world. Visit and follow them on their website and social media accounts. Website | Facebook | Instagram |YouTube